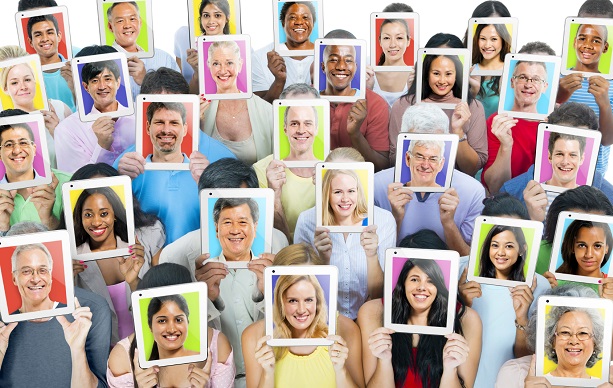 A quick glance across social media sites of business professionals seems to point out one obvious trend: most users are male Caucasians in their mid-thirties.

But is that really an accurate reflection of the white-collar work force? In a recent study done on social media, researchers discovered that as many as 35 percent of users are non-white. A diverse population exists, but it’s up to the companies for which they work to showcase their uniqueness. Whether by gender, race or age,  35 percent of users on Facebook, Twitter, Google+, LinkedIn and other popular social media sites could drive more business to their respective employers simply by being themselves. After all, having a diverse team has proven to help brands take hold of markets that would otherwise be turned off by a homogenous office environment.

There are many steps businesses can take to feature their distinctive team members via social media – here are just a few:

The pictures can be professionally done or taken at a company outing; regardless, they should accentuate the variety of ages, nationalities, and gender as well as non-physical qualities such as previous work experiences and educational backgrounds.

Let them write blogs, create social media groups and even participate in community outreach programs sponsored by the company that relate to what makes them special. Not only will this feed the employee’s self-perception of worth to the team, outsiders will view the company as more than just the mainstream.

This doesn’t mean give everyone the day off every time a holiday rolls around. Instead, have luncheons, decorate the office and enjoy the occasion as a team. If someone is especially tied to the day due to its religious or cultural significance, let them share their traditions to make the event more meaningful. When pictures, status updates and videos about the day hit social media pages, viewers will take notice of a company appreciating the many differences amongst their employees and the positive impact it has on team building.

The nice part of celebrating diversity is that not only will it generate a healthy sense of pride amongst employees, but it’s also been shown that minority groups tend to produce content that people with similar backgrounds enjoy following. Traffic to social media sites could increase just from allowing team members to be the face of the company, attracting viewers with identical interests.

For smaller companies that may lack the diversity other companies naturally have, marketing campaigns that target minority groups are a good option. While their employee base may not include people of a certain race, age or gender, a brand can certainly still meet the needs of these people. Just showing that they acknowledge and care about a variety of social groups could be enough to boost their likeability among the general population.

One important thing businesses should remember: don’t force it! Diversity in the work place should be genuinely recognized and valued, not exploited for the sake of meeting a quota.